From the deck of The Freedom, one of the four ships comprising the Freedom Flotilla to Gaza, I speak to the ship’s captain Jens Marklund and to Swedish actress Oldoz Javidi, who is a candidate for the Feminist Party in Sweden’s upcoming national election. Jens and Oldoz explain why they are taking part in this year’s attempt to break Israel’s inhuman blockade of Gaza.

Our conversation can be seen here: 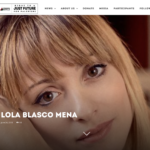