This past October, after more than four years of litigation, Dr. David Kattenburg’s efforts to ensure the truthful labelling of wines produced in Israel’s illegal West Bank settlements entered a new phase.

By way of background, I launched a judicial review application on behalf of Dr. Kattenburg in 2017 after the Canadian Food Inspection Agency (CFIA) ruled that it was lawful for wines produced in Israel’s illegal West Bank settlements to be labelled as “Product of Israel”. Initially, the CFIA agreed with Dr. Kattenburg that these labels were false, misleading and deceptive because the settlements in which they are produced are not situated in Israel but in fact are situated in Occupied Palestinian Territory. The CFIA swiftly reversed itself, however, after coming under intense pressure from the Israeli embassy in Canada and pro-Israel lobby groups.

In July 2019, Canada’s Federal Court overruled the CFIA and agreed with Dr. Kattenburg that the “Product of Israel” labels affixed to bottles of settlement wines sold in Canada are “false, misleading and deceptive” and therefore violate Canadian federal consumer protection legislation.

The Attorney General of Canada appealed.

In May of this year, the Federal Court of Appeal dismissed the Attorney General’s appeal, but rather than uphold the decision of the lower Court, the Federal Court of Appeal decided to give the CFIA another kick at the can. Although the Court of Appeal found that a reasonable explanation for the CFIA’s decision was “totally lacking”, it directed Dr. Kattenburg and Psagot Winery Ltd (one of the producers of wines falsely sold in Canada as “Product of Israel”) to make further submissions to the CFIA, after which the CFIA would be obliged to provide a fulsome explanation for its decision.

On October 18, 2021, I filed Dr. Kattenburg’s written submissions to the CFIA, along with key supporting documents. Those documents include affidavits from Michael Sfard, an Israeli human rights lawyer, and Munif Treish, a member of the City Council of Al-Bireh (Al-Bireh is a Palestinian city that is adjacent to the Israeli West Bank settlement of Psagot). Among other things, Mr. Sfard’s affidavit confirms that Israel’s settlements in the West Bank violate international law and that, even under Israel’s domestic laws, the West Bank does not form part of the sovereign territory of Israel. Mr. Treish’s affidavit, which includes numerous land deeds issued by Israeli occupation authorities, explains that the Psagot Winery is situated entirely on land stolen from Palestinians.

Dr. Kattenburg’s written submissions, the affidavits of Michael Sfard and Munif Tresih and the letter from the Palestinian Delegation are posted below.

The CFIA’s next decision is not likely to be issued for several weeks more. Whatever that decision may be, Dr. Kattenburg and I are determined to litigate this matter until the producers of these wines, who are profiting from a war crime, are required by Canadian regulators to be truthful in their product labelling. 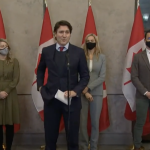 The West’s diplomatic boycott of the Beijing Olympics has nothing to do with human rightsCanadian Politics, Human Rights
Skip to content