On February 1, 2019, I arrived in Caracas, Venezuela. I had never been to this country before. I wanted to see and hear for myself what was happening in the streets during this tumultuous and critical moment for Venezuela’s people.

On the day following my arrival – a Saturday – the opposition and the Chavistas held duelling rallies in Caracas. I attended both rallies.

I began the day by joining on foot numerous opposition protesters who were streaming down a wide boulevard near my hotel, which is approximately seven kilometres from the site where Jaun Guaidó, the de facto leader of the opposition, was scheduled to speak.  As we got closer to the site of Guaidó’s speech, the procession became larger and more boisterous, as can be seen in this video:

[wpvideo cJTzlEPD] Shortly before Guaidó addressed the the tens of thousands of persons who had gathered to express their opposition to the regime of Nicolás Maduro, I recorded this brief report of what I had seen and heard up to that point in time: [wpvideo Wy1Yu2B6] Moments after I completed my report, a woman who appeared to be a Guaidó supporter approached me. She expressed amazement that I was openly taking footage of an opposition rally with expensive camera equipment. I asked her why this surprised her. She claimed that the military routinely confiscated the camera equipment of persons shooting footage at opposition rallies. As I mention in my report, however, I saw no military personnel at the opposition rally.

During the opposition rally, the opposition displayed on a giant screen the flags of states whose governments had recognized Guaidó as the President of Venezuela. One such flag was that of Israel, an apartheid regime:

At approximately 1 pm, I left the Guaidó rally to attend the Chavista rally. I travelled to the Chavista rally by taking the Caracas metro to the Bellas Artes metro station. It was the first time I experienced the subway system in Caracas. The trains ran frequently and smoothly and were air-conditioned (the temperature rises to about 28°C at mid-day this time of year). I found the experience to be a bit more agreeable than using the subway system in Manhattan, which frequently smells like a urinal in hot weather.

[wpvideo 8GrPjqpY] After strolling along Avenida Bolivar for some time, I stopped to videotape this brief report of what I had seen: [wpvideo a5fo4hwh] After I videotaped my report, several Chavistas approached me and asked me from which country I had come. When I told them I had come from Canada, they thanked me for attempting to show to Canadians “la verdad” (the truth).

By that point in time, the crowd near the balcony from which Maduro would speak had grown too large for me to get closer to Maduro, so I stopped at one of the television screens that had been set up along Avenida Bolivar. I shot this video at the moment when Maduro was introduced to the throng:

[wpvideo 8QpOrHnm] I remained at the Chavista rally until Maduro had finished speaking. My Spanish is broken, and I was therefore unable to understand the full import of his speech, but I distinctly heard many references to colonialism, Venezuelan oil, Donald Trump, John Bolton and Mike Pompeo. Maduro also repeatedly employed the term “gringos“.

After Maduro had spoken, I departed the Chavista rally and posted images of what I had seen on social media. Some of my posts elicited criticisms online from opposition supporters. As I pointed out to them, I make no claims about which rally was larger. Indeed, it is possible that the Guaidó rally was the larger of the two, but in my view, it is impossible to say with confidence which of the rallies was larger if your viewpoint was ground-level, as mine was.

Moreover, it is doubtful that reliable inferences can be drawn from the size of the rallies. Chavismo derives its support disproportionately from the poor and the working class whereas the more affluent members of Venezuela’s society tend overwhelmingly to support the opposition. It is easier for those who are relatively affluent to devote a day to participating in a rally than it is for the poor to do so.

I have also responded to some online criticisms of my posts about the rallies by pointing out that I have never praised the Maduro regime. I readily acknowledge that I am an admirer of Huge Chavez and Chavismo, but I do not know nearly enough about Maduro’s record to say whether he has served the Venezuelan people well. What I do know is this:

During the balance of my trip to Caracas, I hope to hear from a range of voices, including persons on the left and on the right who are critical of the Maduro government. Stay tuned.

One final note. After tweeting about what I had seen at the rallies on Saturday, I was asked by someone who appeared to be sympathetic to the opposition to disclose who is funding my trip. For the record, my trip to Venezuela is entirely self-funded. Moreover, although I have compiled and will continue to compile reports for The Real News Network during my trip to Venezuela, I am not being compensated to do those reports. I work for The Real News Network on a pro bono basis. 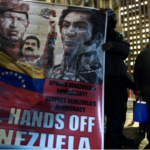