Eldorado Gold’s Skouries mine, situated in a pristine forest in the Halkidiki region of Greece, is, in many ways, a case study in how Canadian extractive corporations enrich their executives and shareholders by ruthlessly externalizing and imposing the costs of their profit-taking activities on local populations.

Earlier this month, I visited the courthouse in Thessaloniki, Greece to attend the first day of a trial in which 21 local activists who oppose this mine are being charged with a range of serious offences, including operating a criminal organization.

While at the Thessaloniki courthouse, I interviewed defence lawyer Vasilis Tzimourtos, who is acting for 9 of the 21 accused activists.

Mr. Tzimourtos argued that, not only is the state’s case against his clients devoid of evidence, but his clients are ordinary citizens who are being persecuted by the Greek authorities for having protected their families and their fellow citizens from the environmental depredations of this mine.

My report on the Skouries criminal trial and my interview of Mr. Tzimourtos can be seen and listened to here: 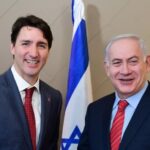 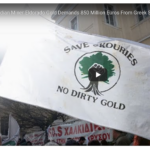