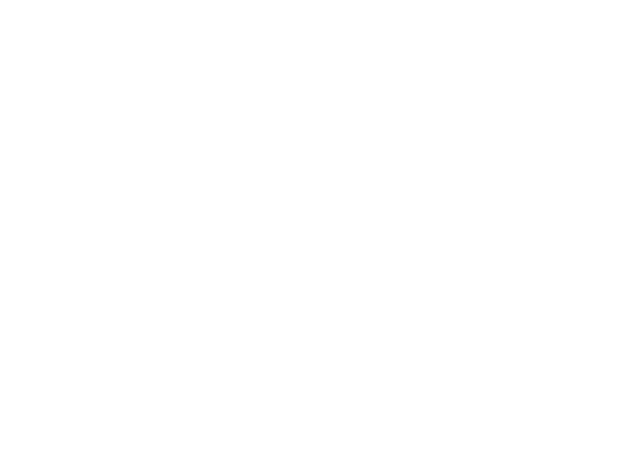 Yesterday, Canada’s Parliament treated us to yet another, pathetic spectacle of bipartisan adoration for Israel’s apartheid regime.

The impetus for Parliament’s latest travesty was the peaceful disruption earlier this week of a speech given by former Canadian Justice Minister, Irwin Cotler.

On June 3, Cotler spoke at Concordia University in Montreal at a conference of “human security” “thought leaders.”

Yves Engler, Malcolm Guy and I – along with several other supporters of Quebec Movement for Peace – interrupted Cotler’s speech and called him out on his unqualified support for the Zionist entity.

Within hours of our peaceful disruption, Canada’s pro-Israel crowd descended into outright hysteria.

Parliament’s latest farce began with Canadian Jewish News (CJN) publishing a report about our disruption. In its June 5 report, CJN gravely intoned that a “muscular Lascaris” was “looming” over Cotler as Cotler professed to have supported the two-state delusion “for the last 45 years.”

The following day, Liberal MP Michael Levitt tweeted a link to the CJN article and described our disruption as “thuggery” and “bully tactics.”

An enraged Levitt then tweeted that he was “absolutely disgusted by the taunting, intimidation & harassment” of “#humanrights champion @IrwinCotler” and called on his “MP colleagues from all sides” “to raise their voices & #StandWithCotler against this sickening display.” 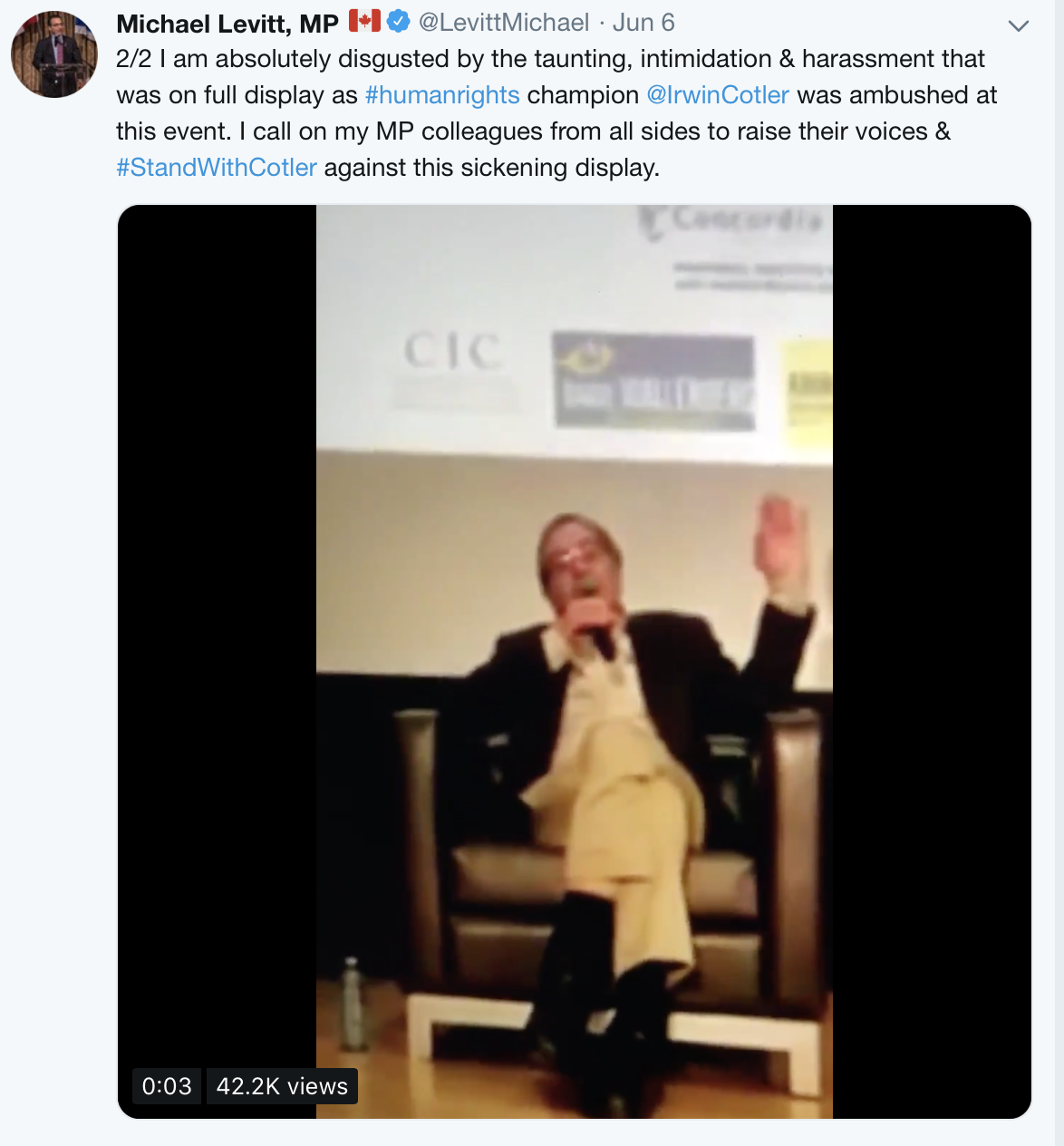 As I have previously explained, Levitt is the Chair of the Canada-Israel Interparliamentary Group and the go-to MP of the pro-Israel lobbying behemoth, The Centre for Israel and Jewish Affairs (CIJA).

It didn’t take long for MPs from both sides of the aisle to respond to Levitt’s incendiary call to action.

Yesterday (June 6), Conservative MP David Sweet rose in Parliament and read a prepared statement in which Sweet condemned “this attack on free speech of one of Canada’s top human rights defenders.”

Shamefully, Sweet’s adulation for Cotler elicited a standing ovation from many of the MPs present.

Liberal MP Rob Oliphant then rose and praised Cotler as a “defender of human rights, civil rights, justice around the world.”

(Predictably, both Sweet and Oliphant have been lobbied by CIJA within the past year.)

The low-brow comedy of Cotler’s defenders did not stop there, however.

Within hours of this Parliamentary spectacle, Avi Benlolo, the CEO of the Friends of Simon Wiesenthal Center for Holocaust Studies, asked that “our ministers also file a police complaint and ensure all measures are taken to enforce the law.”

Right-wing members of the Canadian media soon began to pile on. Geoffrey Johnston, a ‘journalist’ at The Kingston Whig-Standard (which is owned by the relentlessly pro-Israel Postmedia newspaper chain) tweeted that I was a “muscular thug” who had “invaded” the stage occupied by an elderly and ‘frail’ Cotler: 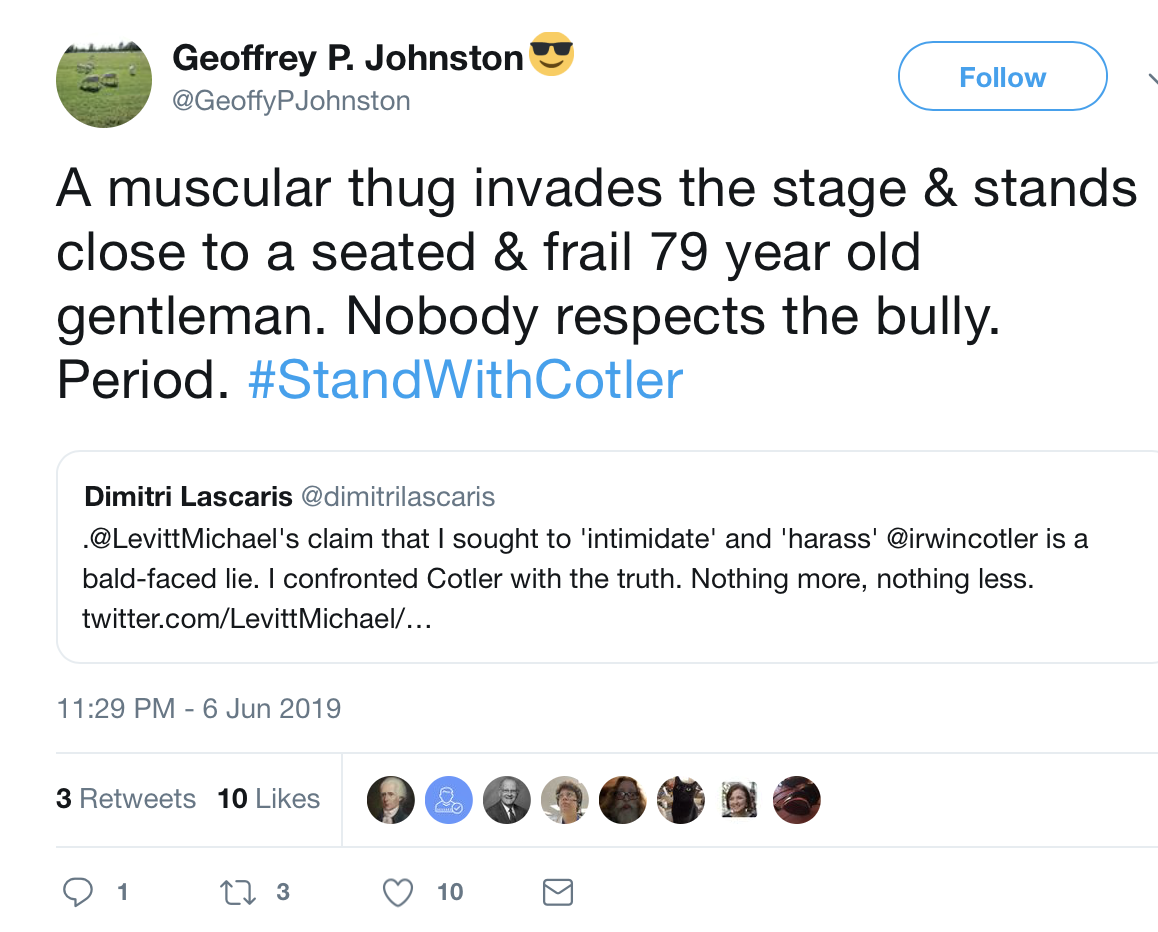 What Actually Happened At Our Disruption of Cotler’s Speech?

As anyone can confirm by watching the two, complete videos of our disruption (which lasted for a total of nine minutes and which can be viewed here), none of us engaged in any behaviour which could plausibly be described as threatening.

Although security personnel were present during the disruption, at no time did they attempt to restrain us out of apparent concern for Cotler’s safety.

Moreover, throughout the disruption, Cotler never evinced the slightest indication that he felt threatened. On the contrary, he remained physically relaxed in his seat and, for much of the disruption, he smiled – rather smugly, I might add.

Furthermore, David Sweet’s allegation that we deprived Cotler of his right of free speech is utter nonsense. Again, anyone can confirm this by watching the video of our disruption.

During my disruption, I paused for significant periods of time on no less than six occasions to afford Cotler an opportunity to answer my question, which was whether there was any crime Israel could commit that would elicit condemnation from him. Not only did I repeatedly afford Cotler an opportunity to speak during my disruption, but I encouraged him to do so.

Also, and as the CJN article of June 5 makes clear, Cotler commented extensively on human rights matters, including Israel and Palestine, after our disruption was complete.

Cotler therefore had ample opportunity to express his views, and that’s precisely what he did.

As I explained to Electronic Intifada after our disruption:

Wittingly or unwittingly, Cotler has assumed the function of legitimizing support for the Zionist entity among liberals and moderate progressives in Canada, and he does this effectively because in matters unrelated to Palestine he has engaged in advocacy promoting human rights around the world.

But he behaves as if historic Palestine is a human rights-free zone and as if the laws that apply to other actors are inapplicable there.

One of my co-disrupters, Yves Engler, recently catalogued the many ways in which Cotler has exploited his status as a purported ‘human rights champion’ to advocate for Israel:

This supposed promoter of peace and former Liberal justice minister has devoted much of his life to defending Israeli violence and has recently promoted war on Iran and regime change in Venezuela.

In a story titled “Irwin Cotler’s  daughter running with Ya’alon, Gantz” the Jerusalem Post recently reported that Michal Cotler-Wunsh was part of the Israel Resilience and Telem joint election list. The story revealed that Irwin Cotler has been an unofficial adviser to Moshe Ya’alon for years. Former Chief of Staff of the Israeli military and defence minister between 2013 and 2016, Ya’alon recently boasted about his role in setting up the West Bank colony of Leshem and said Israel “has a right to every part of the Land of Israel.” In 2002 Ya’alon told Hearted, “the Palestinian  threat harbors cancer-like attributes that have to be severed. There are all kinds of solutions to cancer. Some say it’s necessary to amputate organs but at the moment I am applying chemotherapy.”

Ya’alon’s Telem party is in a formal electoral alliance with Israel Resilience, which is led by Benny Gantz, a former Israeli army chief. To launch his party’s campaign, Gantz released a video boasting about his role in the killing of 2,200 Palestinians in Gaza in the summer of 2014. It actually notes that “parts of Gaza were sent back to the Stone Age.” Gantz faces a war crimes case in the Netherlands for his role in the deaths of civilians in Gaza.

Cotler has described illegal Israeli colonies in the West Bank as “disputed territories” and the Canadian lawyer justified Israel’s 2006 war on Lebanon that left 1,200 dead. He savagely attacked  Richard Goldstone after the South African judge led a UN investigation of Israeli war crimes during operation Cast Lead, which left 1,400 dead in Gaza in 2008–09. Cotler called for the removal of Richard Falk as UN special rapporteur on human rights in the Palestinian territories and William Schabas from his position on the UN Human Rights Council’s International Commission of Inquiry into the killings in Gaza in 2014. Alongside attacking these three (Jewish) lawyers tasked with investigating human rights violations, Cotler promotes the notion of the “new anti-Semitism” to attack critics of Israeli policy.

In an indication of the unquestioning depths of his support for Israeli crimes, Cotler has repeatedly criticized his own party and government’s (mild) expressions of support for Palestinian rights. In May Cotler tweeted his “regret [of a] Canadian Government statement” criticizing Israeli snipers for shooting thousands of peaceful protesters, including Canadian doctor Tarek Loubani, in Gaza. In 2000 Cotler complained when the government he was a part of voted for a UN Security Council resolution calling on Israel to respect the rights of Palestinian protesters. “This kind of resolution, which singled out Israel for discriminatory and differential treatment and appeared to exonerate the Palestinians for their violence,” Cotler said, “would tend to encourage those who violently oppose the peace process as well as those who still seek the destruction of Israel.”

At a 2006 conference held by Israel’s International Institute for Counter-Terrorism, Cotler explained to members of the Israeli military-industrial complex that, in order to win a war, it was necessary, among other things, to win the ‘hearts and minds’ of members of the public by conducting a media war:

Let us recall that the Zionist entity to which Cotler has repeatedly given his advice and counsel is guilty of committing apartheid, that it is implementing an incremental genocide in Gaza, that its security forces torture Palestinian children, that its settlements in Occupied Palestinian Territory constitute a grave violation of the Fourth Geneva Convention and a war crime, that it is engaged in ethnic cleansing in East Jerusalem, and that its snipers have murdered and maimed unarmed protesters – including children, medics and journalists – in Gaza’s Great March of Return.

A true human rights champion understands that all peoples, regardless of their ethnicity, nationality or religion, are equally deserving of the protections of international humanitarian law and human rights law.

After a lifetime of proudly promoting Israel, Irwin Cotler has proven that he does not ascribe to the principle that human rights are universal.

Cotler therefore has no right to hold himself out as a human rights champion. 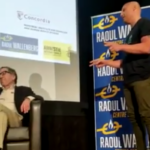 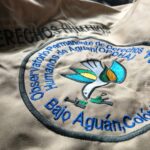 Rampant Human Rights Abuses In Honduras: A View From The GroundHuman Rights
Skip to content