On June 7, 2019, I travelled to Honduras to join a six-member delegation for a human rights fact-finding mission.

The focus of our delegation’s fact-finding mission is local resistance to resource extraction in Botaderos National Park.

As I reported on June 9, the Aguan River valley, a fertile region in the north of Honduras, is now suffering from a water crisis due in large part to the presence of vast African palm plantations owned primarily by Dinant Corporation. Dinant is controlled by members of the Facussé family, one of Honduras’s wealthiest and most powerful families. Dinant has been associated with the deaths of over 100 peasant farmers.

Members of the Facussé family also control mining corporation Los Pinares Investments. That corporation has obtained a concession from the Honduran government to develop an iron oxide mine in Botaderos National Park, which is adjacent to the Aguan River Valley.

Local farmers and environmental activists have sought to prevent the construction of the mine, fearing that it will contaminate the region’s dwindling water supplies. The government of Juan Orlando Hernandez (JOH), whose current term was procured by means of a brazen electoral fraud, has responded violently to their resistance to the mine.

Our delegation has come to Honduras during a period of heightened political and economic instability in the country. With the blessing of the IMF and Western states, the illegitimate JOH regime has pursued a radically neoliberal economic and social program, resulting in sharp increases in poverty and unemployment. Recent steps to privatize healthcare and education have provoked massive opposition and frequent protests.

One of the main tactics now being used by opponents of the regime is to blockade important roads and highways across the country. Yesterday, while travelling by vehicle from Tegucigalpa, the capital of Honduras, to the Atlantic coast, we encountered two such blockades.

We departed from Tegucigalpa after meeting with representative of the Honduran government, including the Vice-Minister of the Environment, Carlos Pineda Fasquelle.

The first blockade we encountered lay on the highway connecting Tegucigalpa to San Pedro Sula, the second largest city in Honduras. The following video shows the long line of vehicles that were brought to a standstill by that blockade. At the beginning of the video, a woman sitting in the back of a pick-up truck can be heard chanting “Fuera JOH!” (Out JOH!).

We encountered the second blockade a short while later, on the outskirts of the city of El Progreso. Our driver, Matias Santiago, got us as close to the blockade as possible. We then exited our mini-van and began walking toward the blockade.

I was the first member of the delegation to arrive at the blockade. There, I discovered that protesters had erected banners at one end of a bridge leading into the city. At the other end of that bridge, I found the smoking remains of a fire.

I then attempted to interview a protester. The protester requested that I not show his face in the video because he was fearful of government reprisals. I therefore pointed the camera at a red banner as he and I spoke to each other. Pedro Cabezas, a member of our delegation who is from the Central American Alliance Against Mining, stood beside me and acted as a translator.

As Pedro and I spoke with the protester, a woman began shouting “alerta!” (at 00:34 of the following video). Seconds after shouts of “alerta!” began, people who had gathered on the bridge quickly dispersed. As they did so, protesters chanted “Fuera JOH! Fuera JOH!”

Moments later, riot police appeared at the opposite end of the bridge. They were armed with tear gas launchers and other weaponry. As can be seen in the following video, protesters began throwing rocks in the direction of the riot police. At the very end of the video, a popping sound can be heard. That was the first volley of tear gas from the riot police.

Soon, tear gas was raining down all around us. Protesters fled the scene. The six members of our delegation who had assembled at the bridge fled with the protesters.

The video below shows the mayhem provoked by the volleys of tear gas. At 0:18 of the video, I passed by someone who appeared to be doing a live report of the protest while running away from the riot police. At 0:27 of the video (by which point I had paused to shoot video of people who were fleeing the scene), Pedro Cabezas passed by me and warned me to avoid a smoking tear gas canister that lay nearby. Another member of our delegation, Professor Michael Berghoef of Ferris State University, was right behind Pedro. It was clear from Michael’s and Pedro’s facial expressions that they were both feeling the effects of the tear gas, as was I.

The members of our delegation then assembled at a service station where Matias had parked our vehicle. There, we found another member of our delegation, Ainhoa Montoya, who is a lecturer of the University of London. All of us were feeling the effects of tear gas, which include a burning, watery sensation in the eyes, difficulty breathing, chest pain and skin irritation.

Earlier in our trip, environmental activists had presented to members of our delegation samples of tear gas cannisters employed by Honduran security forces. Those samples are pictured below and include the GL-302, a high emission tear gas manufactured by Condor Non-Lethal Technologies, a Brazilian firm.

Ultimately, all members of our delegation recovered from the effects of the tear gas.

We are continuing our human rights fact-finding mission and will issue a report of our findings in the months ahead.

In the interim, I continue to report on our mission for The Real News Network 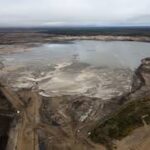 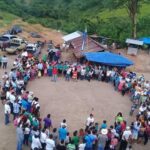