As the Freedom Flotilla prepares to sail from Copenhagen to a besieged and devastated Gaza, I speak to two of its passengers for The Real News.

The first of these passengers is Israeli activist, journalist and political consultant, Yudit Ilany. Yudit is a consultant to Haneen Zoabi, one of fourteen Palestinian members of Israel’s parliament, the Knesset. Yudit lives near the border with Gaza and describes how the Israeli military is committing crimes against humanity there. Yudit also discusses the backlash she has endured from pro-occupation forces in Israel as a result of her advocacy for Palestinian human rights.

The second of these passengers is Heather Milton-Lightening, an indigenous rights activist from Canada. Heather discusses the parallels between the struggles of indigenous peoples in Canada and the Palestinian people. As Heather explains, the British Crown is deeply implicated in the oppression of both Canada’s indigenous peoples and Palestinians, and the methods used by settler-colonial forces to oppress them are remarkably similar.

You can watch my interview of Yudit and Heather here: 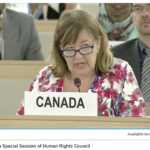 At the U.N., Trudeau Opposes an Investigation into Israel’s Shooting of Unarmed Civilians – including a Canadian DoctorCanadian Politics, Human Rights, Middle East