On June 20, 2018, I joined the Freedom Flotilla in Lisbon. At that point, my hope and intention was to travel with the Flotilla all the way to Gaza – or at least as close to Gaza as the Israeli military would permit us to go – and to report on the voyage for The Real News Network.

The Freedom Flotilla consists of four vessels. The first leg of my participation in the expedition was from Lisbon, Portugal to Cadiz, Spain. During this leg, I travelled on the Norwegian vessel Al Awda, which means, in Arabic, ‘The Return’.

From Lisbon to Cadiz, I was joined on Al Awda by fourteen passengers and crew, including Miguel Urbán Crespo, a member of the European Parliament for the Spanish left-wing party Podemos, Lola Blasco, an award-winning Spanish playwright, and Zohar Regev Chamberlain, an Israeli activist who was born and raised in a kibbutz near Nazareth.

After a three-day layover in Cadiz, where the flotilla received a wonderful welcome from the mayor and local activists, I boarded The Freedom, an aging sailboat.

The next destination for the Flotilla was the Italian island of Sardinia, which was nine days away. This was the second-longest leg of the expedition (the longest being the final leg from Palermo in Sicily to Gaza).

On The Freedom, there were twelve other passengers and crew, including Oldoz Javidi, a Swedish actress who is a candidate for the Feminist Party in Sweden’s upcoming national election, Divina Levrini, a Swedish singer-songwriter, and Kristian Svenburg, a Swedish physician. The captain of The Freedom was Jens Marklund, a Swedish seaman who had participated in prior missions of the Freedom Flotilla.

On The Freedom, I was also joined by two Canadian activists: first mate John Turnbull and Karen DeVito. Karen attempted to break the blockade of Gaza on a prior mission of the Freedom Flotilla. On that occasion, she and the other passengers and crew of the flotilla were kidnapped by the Israeli navy in international waters, forced to enter Israel against their will, and incarcerated for several days in an Israeli detention centre before being deported.

Three days into our voyage from Cadiz to Sardinia, I developed abdominal pain. I had never been seasick before and therefore suspected that something else was wrong. Dr. Svenburg examined me and concurred that my pain was likely due to something other than seasickness. By the fifth day of the voyage, the pain had become more severe. At that point, Kristian examined me again and concluded that I might be suffering from appendicitis.

At that stage, The Freedom was about three days from Sardinia. The nearest major port was Algiers, which was less than 10 hours away. Kristian consulted with Captain Marklund. They decided to make an emergency detour to Algiers.

Hours later, I was met at the port of Algiers by an ambulance and taken to a nearby hospital where I was diagnosed with acute appendicitis. The next day, I underwent an appendectomy.

During my recovery from the surgery in Algiers, I was interviewed by telephone by Canadian journalist David Kattenburg. We discussed my participation in the Freedom Flotilla and the reception that I had received from the Algerian authorities. The podcast of our discussion can be heard here:

Below, I have posted some of the more striking photographs and videos of my experiences with the Flotilla.

Two days ago, a physician at the Algiers hospital where my surgery was performed advised me that I am now well enough to travel. As I write this, I am heading to Naples where the Freedom Flotilla is currently docked. Upon my arrival there, I will continue my coverage of the Flotilla for The Real News.

Sadly, however, it is unlikely that I will be strong enough to participate in the final leg of the Flotilla’s mission, which commences on July 19 in Palermo, Sicily.

In the port of Cascais, just west of Lisbon, a local artist adorns the hull of Al Awda with a striking image of a Palestinian Mona Lisa.

Portuguese MP Bruno Dias, President of the Portugal-Palestine Parliamentary Friendship Group, visits the Freedom Flotilla in Cascais to show his support for the expedition.

In Lisbon, passengers of the Freedom Flotilla speak to local supporters of the Palestinian cause. The speakers include Ron Rousseau (seated third from the right at the speakers’ table). Ron is an indigenous labour leader from the Yukon.

As Al Awda prepared to depart Cascais, I posed for a picture with Majed Kraishi, a Palestinian-Canadian doctor who joined the Freedom Flotilla in Lisbon.

Award-winning Spanish playwright Lola Blasco and Mikkel Grüner, a member of the city council in Bergen, Norway, take in the sunset from the deck of Al Awda.

I sit down for a chat on the deck of Al Awda with Awni Farhat, a Palestinian from Gaza who is currently studying in The Hague, Netherlands.

At dawn, Al Awda and The Freedom arrive in the port of Cadiz.

Before disembarking from Al Awda in Cadiz, the crew and passengers meet for a debriefing in the ship’s cabin.

Local supporters of the Palestinian cause gather at City Hall in Cadiz, where the mayor of Cadiz warmly welcomed the Freedom Flotilla.

In front of City Hall in Cadiz, I interviewed Manal Tamimi, Ahed Tamimi’s aunt, for The Real News Network.

As The Freedom leaves Cadiz for Sardinia, the passengers and crew gather on the deck for an organizational meeting. Canadian activist John Turnbull steers the vessel.

Passengers and crew on The Freedom prepare dinner.

Youssef Sammour, a Palestinian from Dubai and New Zealand, washes the dishes on the deck of The Freedom.

As we head east toward Sardinia, the sun rises over the deck of The Freedom.

A message of defiance scrawled on the kitchen wall on The Freedom.

The sun sets on my last day aboard The Freedom. Hours after this photo was taken, the Freedom delivered me to the port of Algiers for medical treatment.

The Freedom enters the port of Algiers after Captain Jens Marklund and the ship’s doctor Kristian Svenburg decided to make an emergency detour. This was the first time that a vessel from the Freedom Flotilla docked in an African port.

An ambulance awaits me as we dock in the port of Algiers.

The Freedom prepares to depart Algiers as I watch from the ambulance.

The morning after my appendectomy, Mohammad, the chief of surgery at Hôpital Birtraria, came by my room to lift my spirits.

While I was recovering from surgery in Algiers, the passengers and crew of The Freedom sent me this wonderful message of support: 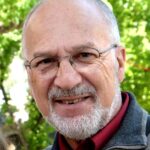 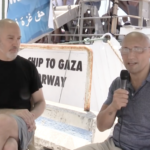